I'm conducting a workshop at RWA next weekend, and, as I was polishing up my PowerPoint presentation this weekend, I realized something.


I'm old and out of touch.
All of my examples of great chemistry between two characters (I'm discussing character development and how it impacts romantic chemistry) are SO dated.

Elizabeth Bennett and Mr. Darcy.
Rhett and Scarlett.
Buffy and Angel.
BTW, don't get me started on Joss Whedon and romantic endings, and I'm discussing Twilight in the love triangle portion, so that's covered.

So, I'm asking you to help me out. Who are some of the more recent couples from books, films, TV, etc., who really seemed to connect on a deeper level for you? The example doesn't need to be from the last month or so, but it'd really help if I had a few that are more recent than Buffy.
Posted by Disgruntled Bear at 1:44 AM 7 comments:

Emily White's Elemental comes out on May 1st, and she just did her first radio interview last night.

And I'm not just saying that because she mentioned this blog. :)

And how blogs are awesome for authors.

And how they--and Goodreads--are part of getting a book out in the modern publishing world.

I listened here (http://www.ustream.tv/channel/utm_campaign=synclickback&source=http://www.ipmnation.com/mculive.cfm/&medium=8502069). There may be an archived version, if you want to listen (start 15 minutes in for her interview; it's about 15 minutes long).

So, aspiring authors, what are you doing to pre-promote your books?
Posted by Disgruntled Bear at 1:21 AM 2 comments: 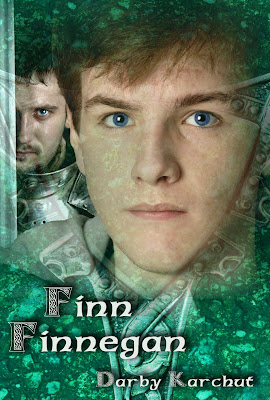 Finn Finnegan
Finn (not bleedin' Finnegan) MacCullen is eager to begin his apprenticeship. He soon discovers the ups and downs of hunting monsters in a suburban neighborhood under the demanding tutelage of the Knight, Gideon Lir. Both master and apprentice are descendents of the Tuatha De Danaan, a magical race of warriors from Ireland. Scattered long ago to the four corners of the world, the De Danaan wage a two thousand year old clandestine battle with their ancient enemy, the Amandán, a breed of goblin-like creatures.

Now with the beasts concentrating their attacks on Finn, he and his master must race to locate the lost Spear of the Tuatha De Danaan, the only weapon that can destroy the Amandán, all the while hiding his true identity from his new friends, Rafe and Savannah, twins whose South African roots may hold a key to Finn's survival. Armed with a bronze dagger, some ancient Celtic magic, and a hair-trigger temper, Finn is about to show his enemies the true meaning of "fighting Irish."

This book is all kinds of amazing! It reminded me of a cross between Harry Potter and the Spiderwick Chronicles. Add this to your TBR list on Goodreads--you won't regret it!

This past weekend in the Berkshires was all kinds of awesome. We arrived on Friday night and spent the weekend talking, eating, writing, brainstorming, watching Breaking Dawn and making snarky comments, and otherwise sharing the joys of the creative process. I hope we'll turn this into an annual thing--it was both madly productive and tremendous fun. Cindy posted our top ten list, which still cracks me up:

Check out the trailer for Witchblood that debuted yesterday on Darkest Sins.

We have a new anthology in the works at Spencer Hill Press, and you can be a part of it!

Call for Submissions
for
Holiday Magick: An Unconventional Anthology of Holiday Stories
a short story anthology
We are looking for stories that tell alternative explanations or interpretations of the classic traditions and/or origins of holidays. Stories in the anthology will come from a variety of viewpoints, including the mythical, the magical, and the supernatural. No holiday is too small to be seen from a different perspective. Just think:

A groundhog sharing his shadow to pay an ancient debt.

St. Valentine creating a holiday to stave off vampire attacks.

Halloween as the demons’ day off.

You may think you know the truth, but you haven’t heard the real stories yet!

Submission Guidelines: Please email your submissions to us at anthology@SpencerHillPress.com
Put your story into the BODY of the email (no attachments, please!) and put "Holiday Magick" in your subject line, along with the title of your story. You are welcome to submit multiple stories; stories will be selected based on quality and on achieving a balance of holidays and story genres within the anthology.

Legalese: We can only accept previously unpublished stories. Please do not use licensed characters or any trademarked or copyright-protected material without written permission in advance of submission (This is NOT the place for “A Christmas Carol for Jabba the Hutt”). We’re also not looking for stories that use holidays merely as settings, without any connection to holiday traditions. Contributor compensation will include a $10 advance paid upon publication, a contributor copy of the paper version, a royalty percentage split among all contributors, and, of course, bragging rights. Stories should be appropriate for adult and teen readers (age 14 and up) – please, no explicit sex or graphic violence, and be sensitive to religious or cultural beliefs about some holidays.
Posted by Disgruntled Bear at 11:22 AM 4 comments:

And the winner of the blog hop SWAG pack is...


ame1184!
Congrats, Alicia! I'll email you for your shipping info.
Posted by Disgruntled Bear at 5:27 AM 1 comment: